The Regional Directorate of Statistics of Madeira releases today, for the first time, a time series for the Banking and Insurance sectors in the Autonomous Region of Madeira, for the 1997-2017 period. This series, which will be updated in a yearly basis, was made from data gathered by Statistics Portugal (INE) during that period.

Establishments of banking and insurance enterprises and persons employed decreased

The commissions received by the OIM sector stood at 26.8 million euros in 2017, a 22.2% growth from the previous year, in which the lowest value of the series was recorded. 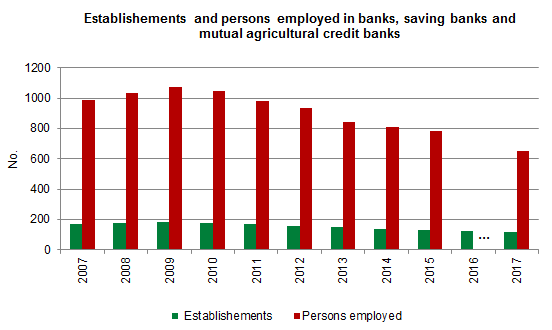 There were 13 establishments in 2017 in the insurance sector of the Autonomous Region of Madeira. In the 1997-2017 period, this number grew until 2008 and since then decreased. Persons employed in this sector have been declining since 1997. In 2017, 58 persons employed were counted, down by 40 from 1997. Personnel expenses in the insurance sector stood at 2.1 million euros in 2017.