The Regional Directorate of Statistics of Madeira (DREM) has been conducting the Survey on Income and Living Conditions (EU-SILC) in the Autonomous Region of Madeira, under the guidance of Statistics Portugal (INE), since EU-SILC is a statistical operation of national scope.

EU-SILC is held in Portugal since 2004 and until 2017 only allowed the dissemination of data for the country. However, in 2015, INE began the process of regionalization of this survey, which was carried out in a longitudinal component of 4 years, that is, between that year and 2018, its sample was successively increased in order to allow, in 2018, the dissemination of data broken down by NUTS2 level.

In this context, DREM today releases on its official statistics website, for the first time, some provisional results for the Autonomous Region of Madeira (2018).

The median equivalised income in the Autonomous Region of Madeira was EUR 8 345, below the national value, which was EUR 9 351. Breaking down the data by NUTS 2 region, the data show that the highest value was registered in Área Metropolitana de

The national at-risk-of-poverty threshold (which corresponds to 60% of median equivalised income) stood at EUR 5 610, while the regional at-risk-of-poverty threshold for the Autonomous Region of Madeira was EUR 5 007. Área Metropolitana de Lisboa leads in this indicator (EUR 6 566), while the Autonomous Region of Azores has the worst result (EUR 4 510).

The at-risk-of-poverty rate (calculated with the regional at-risk-of-poverty thresholds) indicates that the Autonomous Region of Madeira and Azores have the highest values (22.3% and 21.6%). Alentejo (14.2%) had the lowest value.

In May of next year, when the final results of EU-SILC are released and published, more indicators should be made available for the Autonomous Region of Madeira. 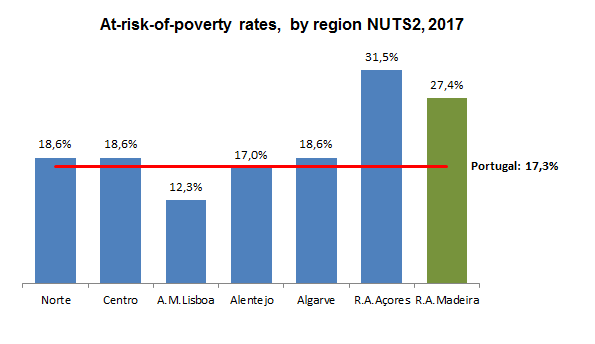